This term in Year 1 we have completed lots of exciting investigations linked to the story of Bob the Bubble who thought he was useless.  In science we started investigated bubbles which included making and changing bubble wands and seeing the impact this had on the bubble shapes.  We then came up with our own investigations e.g. colours / size etc.  We created bubble pictures in art and used our English skills to write instructions, stories and poems.

In science, we have investigated animals including humans.  We investigated the 5 senses (sight, hearing, taste, touch, smell) and sorted pictures depending on which sense we used.  We then sorted animals by looking at their features and what they eat.  We created some unusual animals of our own by making lists of their features and drawing a picture.  We played ‘guess the animal’ by asking questions about a hidden animal to identify the object / animal.

In Geography we have been investigating the local area.  We compared town and country environments and created pictures using computers based on where we would rather live.

We also designed, made and ate pizzas.  We started by trying lots of different foods and describing them, then we decided what we wanted on our pizza.  Following that, we made the pizzas and took them home to eat.  They were delicious! 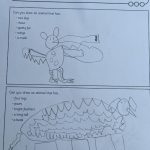 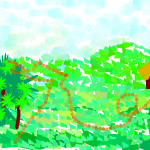 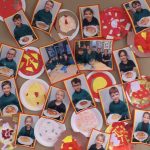 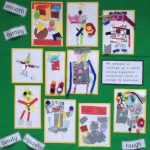 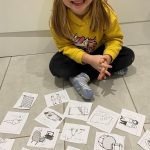